How seriously the Department of Natural Resources (DNR) led by Commissioner Sarah Strommen has blundered in its ongoing attempt to change the law governing expenditures from the Critical Habitat Program account remains to be seen.

But blundered it has.

Laid bare a few weeks ago, when Gov. Tim Walz’s budget was unveiled, showed the DNR’s hoped-for switcheroo. They would allow money from an approximately $25 million stockpile gained through sale of the state’s special Critical Habitat license plates to be used for fish and wildlife research, population assessments and other DNR work-a-day purposes. This, rather than, as the law requires, would be used to purchase habitat deemed critical to the continued existence of Minnesota fish and wildlife.

Virtually every major conservation group and many smaller sportsmen’s clubs and organizations statewide have signed a letter protesting the DNR’s proposal.

The issue, as the conservation groups see it is straightforward. The state, through the DNR, made a deal with Minnesota vehicle owners in 1995, saying if motorists voluntarily popped for an extra $30 a year to purchase the special decorative license plates, the DNR would seek matches of the accumulated funds to buy and preserve fast-disappearing fish and wildlife habitat. 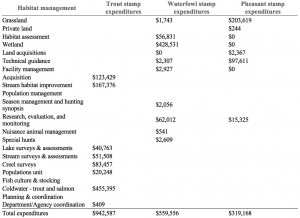 One of the special license plates features a trophy buck and appeals to deer hunters. Another shows anglers in a boat fishing, which more than 1 million Minnesotans do every year. The most recent Critical Habitat license plate highlights the plight of bees and other pollinators.

Attractive as the plates are, their primary appeal is the opportunity they present to motorists to help counter Minnesota’s ongoing loss of fish and wildlife habitat.

“Many Minnesotans share a commitment to maintaining healthy populations of bees, butterflies and other native pollinators,” Strommen said, christening the pollinator plate in January. “This beautiful new Critical Habitat license plate is an opportunity to show your support for pollinators while providing important funding to preserve habitats.”

Because, as noted on this page a few weeks ago, the DNR hasn’t been spending the bulk of license-plate receipts “to preserve habitats,” but instead has hoarded the Critical Match account.

Why? DNR leaders say a shortage of land and/or money donations required to match the accumulated funds prevents them from purchasing critical habitat. They also say the DNR needs money to pay for fish and wildlife monitoring, assessment and research costs associated with the critical habitat program.

Conservation groups aren’t buying it, because they know the slippery accounting slope the DNR is attempting to grease.

To illustrate the critics’ point, consider expenses detailed in the accompanying graphic of funds gained by the DNR through sale of state waterfowl, pheasant, and trout and salmon stamps. The stamps are required in addition to hunting or fishing licenses to pursue the designated species.

Proposed by hunters and anglers themselves as essentially a self-tax, and enacted into law by the legislature, the stamps and funds raised through their sale are intended to accelerate the conservation of ducks, pheasants, and trout and salmon.

Critical to the stamps’ original proposals was that funds raised by their sale wouldn’t supplant the financing of fish and wildlife programs already in existence — thereby allowing the DNR to shift funds that had paid for these services to other uses — but rather to supplement existing programs.

Put another way, hunters and anglers wanted the stamp funds to pay for new conservation efforts, not ones already in existence.

Now look at the graphic showing expenses for the three stamps. Trust, as you do — as hunters and anglers must, perpetually, if they are to keep faith with the stamps’ original purposes — that none of the illustrated DNR undertakings and associated expenses was possible without the stamps.

You’d have to believe also there was no “department/agency coordination” costing $409 a year.

Similarly, if you’re a duck hunter, to believe the DNR is keeping its promise to supplement — not supplant — waterfowl management, you’d have to believe that, before the $7.50 state waterfowl stamp’s enactment in 1977, no funds existed for technical guidance, facility management, season management and hunting synopsis, research, evaluation and monitoring, nuisance animal management or special hunts.

Ditto pheasant hunters and their $7.50 stamp.

But that’s not all.

Each year, the DNR is reimbursed significant portions of these expenses by the federal government from a fund supported solely by hunters’ and anglers’ purchases of fishing and hunting equipment and ammunition.

In other words, hunters and anglers, 1) pay for the three stamps, whose proceeds, 2) fund trout, salmon, waterfowl and pheasant programs that, per agreement with the DNR, are supposed to supplement, not supplant, previous programs. Then, 3) the DNR is reimbursed for significant portions of these programs from a fund paid into by hunters and anglers. But, 4) the reimbursed federal funds — about $600,000 in the most recent fiscal year — don’t return from whence they came to further supplement trout, salmon, waterfowl and pheasant programs.

Instead they are deposited into the general Game and Fish Fund, to be used as the DNR sees fit.

Which is why no one who knows anything about how the DNR budgets wants the agency to get its hands on the Critical Habitat license plate money.