Home/Updates/Habitat plates veer from their intended mission
Previous Next

Minnesota’s Critical Habitat license plates are increasingly popular with vehicle owners. But with record-level revenue from the plates’ sale, the DNR is purchasing less habitat than ever. Now the DNR wants to direct some of the money toward research and monitoring, among other uses. 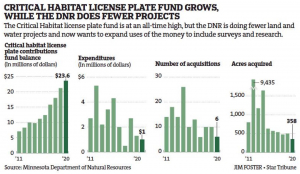 Dedicated accounts are the backbone of American conservation. Beginning with establishment of the federal duck stamp in the 1930s, such funds have helped the U.S. retain a semblance of its original open lands, clean waters, fish, and wildlife.

By law, for example, 98% of funds derived from sales of federal duck stamps must be used to protect wetlands and associated habitats through purchases of land or acquiring it by leases or easements.

Thus the funds are dedicated.

Had the duck stamp program been established without such restrictions, its effectiveness would have been diluted over time, as, inevitably, government agencies and private groups, among others, chipped away at its bankroll, arguing the money was needed to patch this budget hole or that, or for some other purpose.

The Pittman-Robertson Act of 1937, amended in 1954 and other years, imposed an excise tax on hunting guns and ammunition (later expanded to include handguns and archery gear). It similarly stashes its receipts in a dedicated account that can be tapped only for “acquisition and improvement of wildlife habitat, introduction of wildlife into suitable habitat, research into wildlife problems, surveys and inventories of wildlife problems, acquisition and development of access facilities for public use, and hunter education programs, including construction and operation of public target ranges.”

Proceeds from sales of Minnesota duck, pheasant and trout stamps also are held in dedicated accounts.

Which brings us to Minnesota’s Critical Habitat license plate program.

Created by statute in 1995, the program offers most Minnesota vehicle owners one of 10 decorative license plate options that feature a chickadee, a loon or other critter, the purchase of which, for an extra $30, shows the motorist’s support for “critical habitat.”

The DNR’s most recent such plate features a bee and butterflies and its purchasers, according to DNR Commissioner Sarah Strommen, are helping to save the state’s fast-disappearing pollinators.

“Many Minnesotans share a commitment to maintaining healthy populations of bees, butterflies and other native pollinators,” Strom-men said while unveiling the new plate last month. “This beautiful new critical habitat license plate is an opportunity to show your support for pollinators while providing important funding to preserve habitats.”

Because a closer look at the DNR’s license plate Critical Habitat program reveals the agency in recent years has only minimally deployed license plate funds to preserve habitat.

In fact, rather than spend the money the way the DNR told license-plate purchasers it would, the agency has allowed the account to balloon to a record level, while making the fewest habitat acquisitions in the program’s nearly 26-year history.

Now, to spend down the account, the DNR and Gov. Tim Walz propose to “modernize” the license plate program.

A couple of their ideas make sense. One is to change the $1-to-$1 ratio of license-plate funds spent to match land or money gifts the DNR receives — thereby qualifying such gifts as possible Critical Match acquisition projects — to $2 from the account for every $1 gifted. This would more quickly put license plate money to its intended use while perhaps also making the program more attractive to prospective donors.

The DNR is also correct when it proposes to lift the $950,000 cap on nongame contributions to the Critical Habitat match program, provided the current limit is replaced by another cap and not made “unlimited,” which theoretically could deplete the fund for a single project.

But the DNR and Walz wander astray when they propose to spend money from the Critical Habitat matching account for “land management,” “monitoring surveys,” “conservation easement monitoring” and “research.”

In state agencies as big as the DNR, such expense categories are the bureaucratic equivalent of black holes — their capacity is infinite. Their allowance also breaks the habitat-acquiring contract the state struck beginning in 1995 with Minnesotans who voluntarily buy the special plates.

In a letter to Strommen last week, the organizations, including the Trust for Public Land, The Nature Conservancy, Back Country Hunters and Anglers, Trout Unlimited, St. Paul Audubon Society, Pheasants Forever, Ducks Unlimited and Conservation Minnesota, among others, said, in part:

“Minnesota citizens who donate through Critical Habitat license plates expect that their investments will be used to provide and protect critical habitat. Not fulfilling this promise to the public is misleading and conflicts with current statute.”

Assistant DNR Commissioner Bob Meier is the agency’s point person on the project. He’s a good guy who’s been around a long time, and DNR stakeholders respect him. He indicated last week the DNR might amend its proposal, given stakeholders’ cool reception to it.

But as legislators review proposed changes to the license plate program, which they inevitably will, they should:

• Regard as bogus any suggestion that lottery or Clean Water, Land and Legacy funds be allowed to “match” money from the Critical Habitat license plate fund to create a project. Each of these funds was established to expand the pool of money available for conservation through matching by conservation groups and others, not to compound one fund by doubling it up with another.

• Ensure the $25 million now in the license plate account be spent as Minnesotans were told it would be from 1995 to present — by matching it with equal cash or land contributions from conservation groups or others to acquire critical habitat.

“But we’re not receiving land or other contributions to the Critical Habitat matching program fast enough or large enough to use the $5 million a year we’re receiving in license plate money,” the DNR will argue.

Then the DNR should advertise that it’s looking for donations, lean on stakeholder groups to find matches, or otherwise come up with a solution.

But keep faith with the public.

Or stop selling the license plates.