No one from DNR ever spoke to MLFAC about this agreement

The following is a letter being sent today from Dean Hanson, Mille Lacs Fishery Advisory Committee to DNR Commissioner Tom Landwehr. It is very troubling to say the least. Please read his letter (and DNR’s Agreement with the Tribes) and see my comments below.

We were shocked to say the least. No one from the DNR had ever spoken to MLFAC about this agreement, either before or after its signing. This agreement was never disclosed to the public at any time. Why would the DNR secretly negotiate a settlement like this without disclosing it to anyone? This is exactly the type of thing, which reinforces our position that more transparency is needed in connection with DNR and Band discussions and negotiations. It is an example of why we have requested participation of some kind in FTC meetings.

We also need to consider that this agreement resulted from an overharvest of 6,800 pounds in 2016. It was an estimated hooking mortality, not an actual harvest. These numbers come from expansions of creel census data, which have always been suspect to us, as well as an estimated hooking mortality study, which we have questioned since its release. We also believe that this overage may well be within the margin of error of all of these calculations, as well. In addition, the DNR has stated several times that they do not believe that any harm was done to the spawning stock biomass, the 2013 year class or any part of the walleye population as a result of the overage. So why, given the insignificant overage and its minimal impact, did the DNR give up so much?

The DNR gave the Bands 50% of any harvestable surplus over 64,000 pounds. They set harvestable surplus levels, which could severely reduce our potential harvest in the future. They locked us in to a hooking mortality based on the suspect hooking mortality study. They locked us in to an overage program which all comes due in 2020 and will probably significantly reduce our harvest potential in 2018-2020.

At this point, what did you have to lose by letting them go back to court and fighting it? Maybe a Phase II lawsuit would settle the allocation issues with a more favorable outcome for Minnesota sportsmen.

We believe MLFAC, as well as the public deserves answers to these and many other questions and we request an open meeting with the DNR, MLFAC and anyone else who is interested within 2 weeks. Please respond to this as soon as possible.

DNR’s Agreement with the Tribes

My Take On Dean Hanson’s Letter

The agreement was negotiated entirely in secret. This shows the DNR’s leadership has no regard for the MLFAC members whom they appoint. It ignores the constituencies MLFAC represents and the suggestions they have been making for improving the “co-management” of Mille Lacs.

It must be infuriating to find out that Mille Lacs “co-management” regarding walleye angling has been hard-wired–for the next three years! Especially galling is having an agreement based on research methods and data challenged as faulty by MLFAC members at every meeting.

The agreement leads one to believe all the meetings with Governor Dayton and DNR officials have been nothing more than dog-and-pony shows.

If an agreement like this has to be done behind closed doors, and the results known only if leaked, is there more going on than meets the eye? At a minimum it look like a one-sided sweetheart deal of a payoff, extracted over a measly 6,800-pound overage.

It is time to hold the Governor and DNR accountable for their actions!

** Other parties to this agreement, tribal management and the taxpayer-funded GLIFWC, should also be held accountable. They should be exposed for breaking trust with the citizens of Minnesota, and violating the spirit of the Supreme Court’s affirmation of 1837 Treaty harvest rights.

** Governor Dayton should call for a priority investigation by the Office of the Legislative Auditor to be conducted as soon as possible.

** The appropriate House and Senate Committees should not only review the Auditor’s report, but also look back at all DNR-Tribal/GLIFWC meetings since Court ordered negotiations began.

Monday morning, August 14, driving up the west side of Mille Lacs Lake, I saw only a handful of boats, even on such a beautiful day. I was headed up to meet with Twin Pines’ Linda Eno, Lundeen Tackle Castle’s Bill Lundeen, and Red Door Resort’s Steve Kulifaj.

I had the privilege of joining them for a meeting with Governor Mark Dayton and DNR Commissioner Tom Landwehr. We met to discuss the impact of DNR regulations on anglers and Mille Lacs businesses.

The hour and a half meeting touched on a variety of issues. We had a straightforward conversation that was pointed at times. One highlight was a hearing on how hard it is to run a business without a plan. Can you imagine a Mille Lacs resort customer calling in January to book a summer stay, and having to ask if they can fish while on vacation!

The DNR-Tribal regulations are usually announced only a month or so before opener. These days pre-opener regs can be fleeting, since a mythical number called “hooking mortality,” a term invented by the DNR-Tribal co-management team, drives the regs.

We also touched on the number and location of DNR test nets, inaccurate creel surveys and boat counts, DNR refusal or inability to answer questions and concerns brought by MLFAC members, and the State not standing up for non-tribal interests and anglers.

The Governor and Commissioner were reminded how Mille Lacs once provided memories and served the cultures for ALL who used it. When confronted with the debacle of 2016: the lake being closed, opened, and reclosed; the Governor stated he was threatened by the Mille Lacs Band of taking the state to court.

The consensus of resorters was “good, lets go back to court, only this time use all documents and input.” Governor Dayton then stated he has no leverage. Resorters thought he had plenty, suggesting for example, expansion of statewide gambling. The possibility of even a few machines in each resort would provide all the leverage he needs.

I also had the opportunity to present the Governor with thousands of petitions collected by PERM to follow through on his campaign pledge: “I believe that all hunting and fishing in Minnesota should be done under the same rules”. I also told them both “grow a pair” and tell the tribes they are in charge of all Minnesota’s natural resources!

Since co-management was implemented bag limits have gone from 6 walleye to zero. Over 50 businesses have gone under. And those still open are surviving day to day.

The walleyes are there; take the politics out of managing them! 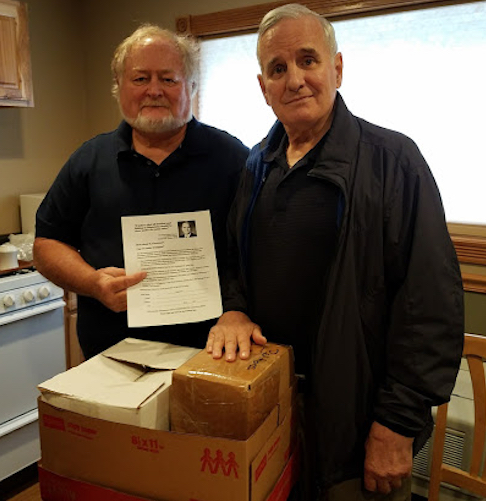 Given that Governor Dayton believes “all hunting and fishing in Minnesota should be done under the same rules,” PERM’s petition asked for the following:

We the undersigned users of Minnesota’s natural resources petition the Minnesota Governor, Attorney General, DNR Commissioner, and Legislature to protect the interests of all sportsmen and women, and Minnesota’s economic future by:

* Passing enabling legislation requiring the DNR to consider the impact on the state’s hunting and fishing when adopting game and fish rules, when applied equally to all citizens, and making funding decisions.

* Using all available means to ban the use of gillnets for game fish;

* Standing up for the interests of all citizens, sportsmen and women, property owners, and resort owners in any potential expansion of “treaty harvest rights”;

* Making any such negotiations transparent to the public and subject to Minnesota’s good government “open meeting” laws; and

Making your vision for equal protection of the law a reality.

Congratulations to the winners! And many thanks to all who entered the raffle.
Your support is critical to PERM’s success.