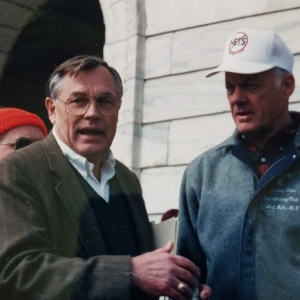 Hanson, of Hopkins, was a founding member of Proper Economic Resources Management, which came together in 1994, according to PERM president Douglas Meyenburg.

“He was a charter board member and was on the board up until the day he died,” Meyenburg said.

Hanson and others fought a deal between the state of Minnesota and Indian bands that would have established an exclusive fishing zone for the bands, Meyenburg said. When that deal fell apart, the Mille Lacs Band of Ojibwe sued the state in a case that ultimately was decided by the U.S. Supreme Court in 1999.

“He tried to educate people on what would happen if there ended up being hunting and fishing outside of state regulations,” Meyenburg said.

Meyenburg said Hanson “spearheaded a movement that brought many people to testify at House and Senate hearings, boat parades, informational meetings, and events to bring awareness to the issues.”

“I would say he was a tireless, tireless advocate for equal rights and what was going on with this lake,” said Eno, who recalled lobbying in Washington, D.C., with Hanson.

Hanson, she said, sponsored her bid for governor of Minnesota in 2010.

“He sunk so much time, energy, and money into this cause,” Eno added. “It was very personal and near and dear to his heart. Everyone will feel the loss. It will take multiple people to pick up the loss of his time, energy, and finances. From the beginning, he was in the fight, to the Supreme Court, fighting for landowners’ rights. From Day 1, he was in it.”

Meyenburg said PERM will continue to fight for state anglers regarding Lake Mille Lacs, which has seen three consecutive catchand-release-only open-water walleye-fishing seasons that have hurt businesses around the lake. He said Hanson never lost hope. “For all of the time and dedication he put into this, I am really sorry that he didn’t live long enough to see it settled,” he said. “He never lost the gumption or the drive to continue. He was 84 and he was still heading around the state and talking to groups and people. He was an important part of our board. We are going to miss him and his input and his friendship and everything that goes with knowing somebody 25 years or so.”

Meyenburg said Hanson had a deep knowledge of the issues and was a great resource for the organization.

“He is the reason that the organization was formed and that there are still people out there willing to fight for what is right,” Meyenburg said. “He traveled the whole state, talking to anybody who was willing to listen. He got the ball rolling.”

A visitation will be held at Gethsemane Lutheran Church, 715 Minnetonka Mills Rd., in Hopkins at 10 a.m. on Saturday, July 21, with a memorial service at 11 a.m., according to PERM.