Since the 1999 Supreme Court ruling upholding the fishing harvest rights of the Mille Lacs Chippewa Band of Chippewa’s, Minnesota DNR has increased the Chippewa Band’s allocation of fish on Lake Mille Lacs to over 142,000 pounds of fish, a staggering amount. As a result, the sustainable harvest has been unstable and precarious. However, the DNR has instituted strict fishing quotas that only apply to Lake Mille Lacs. These restrictions have hurt industries most dependent on tourists, as frustrated anglers have sought out other lakes in the region. These industries comprise 14.7 percent of the local economy, and have suffered the brunt of the real damage, as these restrictions do not operate in a vacuum. Policymakers should take notice and action to correct the situation. Full Report here

Help our DNR bring some sanity to this situation

On July 26 the Minnesota DNR will begin secret meetings with the Mille Lacs band of Chippewa and GLIFWC (Great Lakes Indian Fish and Wildlife Commission) to determine the future of Mille Lacs sport fishing. They will set safe allowable harvest guidelines for State anglers and Band members for the next five years. The conclusion of these meetings could very well seal the fate of Mille Lacs and the entire 1837 Treaty area. READ MORE …

Kudos to the DNR for recognizing the Mille Lacs problem

The DNR deserves credit for finally facing the gillnetting problem on Mille Lacs. They used plain English in pointing out the “tribal fishery exploitation rates” as the problem. It’s not the sport anglers fishing with hook and line. DNR to bands: Mille Lacs has problem

Now the DNR must keep the public involved and informed. The Mille Lacs fishery management process should be open and transparent.

There is no need to keep increasing the size of treaty harvests—let alone allowing the use of gillnets. Thanks to PERM members and supporters who helped pay for our Mille Lacs Band Standard of Living report, we now know that the “subsistence” argument no longer applies.

That is important to know, because if this situation does go back to court, then the court will have to look at whether the tribes have achieved a “moderate standard of living.”

In the case of Mille Lacs band, they have. According to PERM’s report on the US Census Bureau’s 2010 count, Median Household Income for a 4-person Mille Lacs Band Family is $70,809. This compares to $65,737 for Mille Lacs County.

I don’t have an issue with a few ceremonial fish being harvested as long as MN State laws are followed. But now that a moderate standard of living has been achieved, the courts can, as they have in the past,—and must—stop the nearly open-ended exploitation of one of Minnesota’s greatest natural resources.

Feel free to let DNR and your elected officials know that you want the Mille Lacs fishery management to be open and transparent.

Can “subsistence” still be a basis for justifying the ever-expanding Mille Lacs treaty harvest quotas?

The need for subsistence fishing, by definition, does not apply after a “moderate standard of living” is reached. Which is the case when U.S. Census Bureau data show that the 2006 -2010 five- year average of median income of a 4-person Mille Lacs Band household is $70,809. For Mille Lacs County, it is $65,737.

If anything, the ever-expanding Mille Lacs treaty harvest quotas should be declining.

At the very least, gillnetting (a factory farm method,) during the spawning season of Minnesota’s premier game fish, netting mortality of rejected species, and “incidental take” (that included a state record Muskie) should no longer be tolerated.

Gillnetting spawning walleye contradicts all principles of conservation and stewardship.

It’s time to end it.

PERM is asking the legislature to get involved. Examples of where to start included proposals this session for: legislative approval for treaty harvest agreements, fishery management cost reporting, and open meeting law applied to treaty-related meetings.

Take steps to move both tribal and non-tribal parties beyond “what’s mine” and work together to restore Mille Lacs as a treasured angler destination and major asset for the Mille Lacs economy. 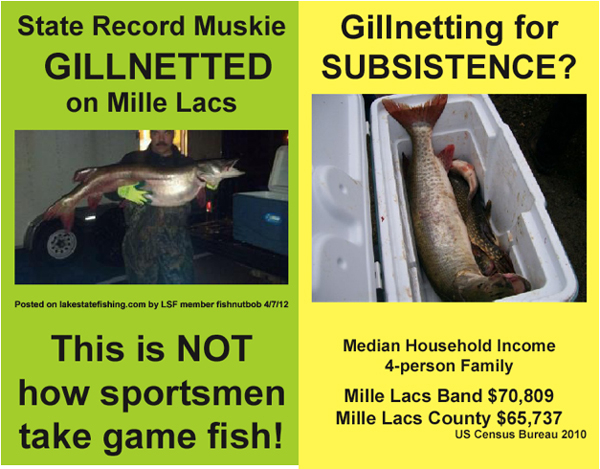